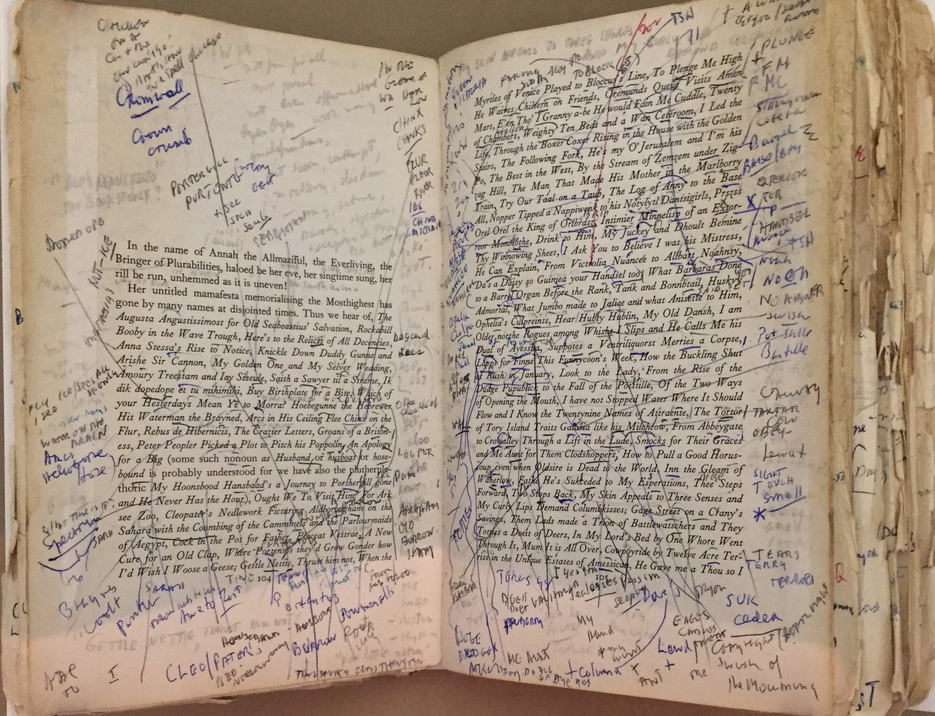 As a Joycean and a modernist, one of my morbid fascinations is the life of Delmore Schwartz: a precocious and eccentric genius who was undone by the genius that created him, as that genius morphed to extreme paranoia, anger, and seclusion by the end of his relatively short life.

One of my favorite moments of rock and roll trivia is that Schwartz was Lou Reed's mentor and personal hero. Among forbidding Lou Reed to pursue rock music—advice which Reed thankfully ignored—Schwartz told Reed that "there are a few things better than to devote one's life to Joyce.”

The picture above is Schwartz's personal copy of Finnegans Wake. Having read Wake a number of times for shits and giggs, and doing some light annotating myself, I can't look at the picture and feel bad either for Schwartz or myself. Are Schwartz' annotations requiste for understanding the book? As the annotater, or the archon, can some things that we want to preserve be left to that realm of imagination that is neither, in McGann's words "expository or informational" (McGann 175). In other words, can annotation—archiving—do violence to the primary text?

McGann writes that poems "are built as complex nets of repetition and variation, they are rich in what imformational models of textuality label 'noise.'" (175). In regards to Wake, there happen to be entire large sections of the text that are "noisy." Or, in other words, sections of Wake escape any kind of structualist reading/analysis that archiving appears to require. The "noise" escapes any kind of conventional system of organization or structure.

McGann goes on to write that "the logic of the peom is only frameable in some kind of paradioxical articulation such as: 'a equals a if and only if a does not equal a'" (175).

So the question is, are Schwartz's paranoid efforts above—or any similar electronic archival effort—productive? Well, I think that depends on repretoire. Which is to say that Schwartz's effort to make sense of Wake depends on his own, personal obsession, which has led him to consume Wake over and over again. But if that obsession ends with Schwartz, then Schwartz is just, well, crazy. Maybe archving is just a way to say "this is why what matters to me should matter to you," even if I can't systemetize everything that makes it special.